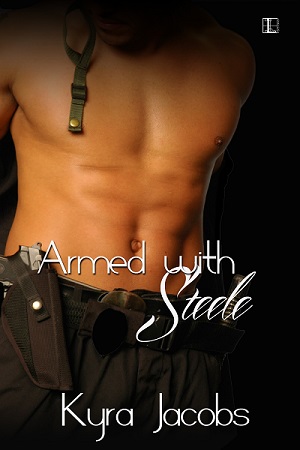 What happens undercover, stays under covers.

Jessica Hartley is looking for answers surrounding the mysterious car accident that nearly claimed the life of her best friend. She’s willing to risk it all, even her fledgling business, to find the person responsible and bring them to justice.

Nate Steele is more than willing to help Jessica, but for reasons all his own. He’s been watching the infamous Maxwell Office Solutions for some time now, convinced there is more going on than meets the eye. When his chief issues a cease and desist order yet again, Nate has no choice but to accept inexperienced Jessica as an undercover partner outside the letter of the law.

Will Jessica and Nate be able to flush out Maxwell’s elusive villain, or will their growing attraction for each other sabotage their undercover ploy? Motives aren’t always what they seem when Jessica finds herself armed with Steele.

Other books in the Hometown Heroes collection:

Excerpt from Armed With Steele:

“So, did you come here to con me into feeding you again, or did you really want to talk about the accident?”

“I came by to talk about the case. Although, now that I know you’re the neighborhood Martha Stewart, I might have to stop by for leftovers more often.” He chugged the last of his milk and set the glass down with a satisfied, “Ahh.”

“Hmm. Well, if you promise not to lurk in our shrubs and scare the crap out of me every time I come home, I might consider saving some for you from time to time.”

He chuckled. “I promise. But in all seriousness…” He pointed to the now-closed kitchen window. “You really need to do a better job of protecting yourself.”

“Nate. Please, when the uniform’s off, I prefer to just go by Nate.”

“Alright then, Nate,” I said, and rather enjoyed how his name rolled off my tongue. “We’ve already been through the ‘Jessica is a dumbass and needs to learn how to lock her windows and doors better’ lecture. It won’t happen again, so let’s move on.” I leaned forward in my seat. “Tell me why you’re here.”

His gaze locked on mine. “They closed the Sullivan case yesterday.”

All that waiting while he ate just so he could serve me up a big dish of disappointment? Thanks for nothing. “I thought you were closing it after we talked last weekend.”

“That’s what I thought they’d planned to do. But I shared your information with the lead detective on Monday, and we kicked your theory around. About there being another car. Maybe something linked to Maxwell Office Solutions.”

“Yeah. Even got some buy-in from his Sergeant. But then we hit a roadblock. One we can’t seem to get around.”

“So? What, are the owners of Maxwell some big campaign contributors or something?”

His eyes met mine, fury visible just beneath the surface. “On the books? Yes, we’ve been overridden.”

“On the books?” I tipped my head to the side. “What other option do we have?”

“That’s what I came here to talk to you about. I hate being told to walk away from this case, especially when someone might be getting away with attempted murder. So I have another idea. One that’s a little less orthodox.” His eyes now glowed with a sense of purpose, determination.

“I think we should re-open the case.”

“But you just said–”

“Not the department. You and me. We,” he said, motioning back and forth from me to him, “should reopen the case.”

Nate leaned forward, making me an unwilling captive to his intense gaze. “Jessica, how badly do you want to know what really happened to Grace?”

I wanted to look away, to avoid whatever trap he was setting. But I couldn’t. “More than words can describe.”

His voice took on a darker edge. “And how far would you be willing to go to find those answers?”

“Whatever it takes,” I whispered, my mouth working in conjunction with my heart. Which, unfortunately, was running about a millisecond faster than my brain.

“That’s what I was counting on.” He leaned closer and unleashed the full power of those brilliant blues on me. “How would you feel about going undercover to help me get those answers?”